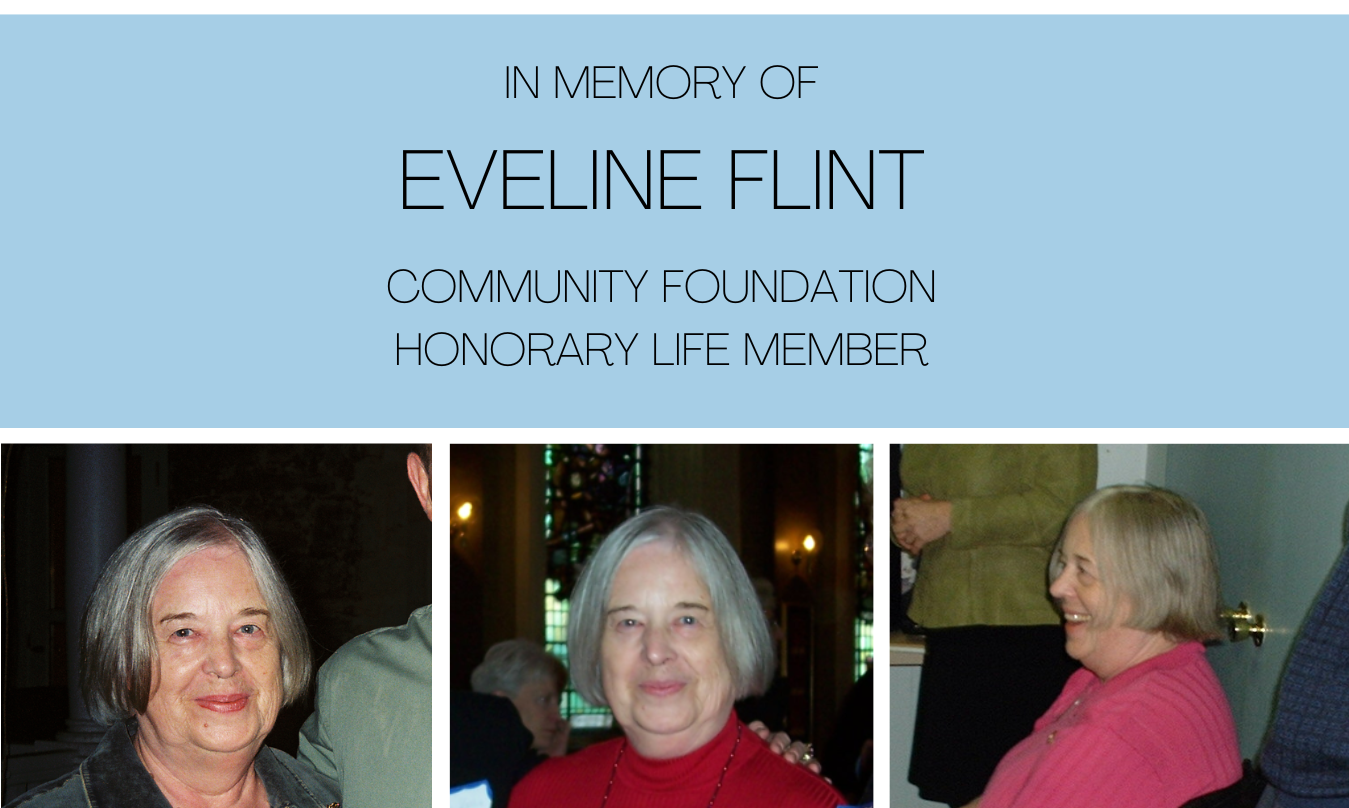 The Board of Directors, staff and volunteers express their deepest condolences to Eveline’s son Claude and her three grandchildren, Connor, Wyatt and Sydney Flint.
Donations in Remembrance of Eveline Flint
Claude has noted that Eveline was extremely dedicated to our Community Foundation for over 25 years. In recognition of this, her family is requesting that any remembrance be directed to the Foundation. A memorial portal has been set up at https://canadahelps.org/en/dn/74088
Eveline’s Contributions to the Community Foundation for Kingston & Area
As the last President of The Martello Tower Society Board (in 1994) Eveline helped turn it into the Community Foundation for Greater Kingston (now the Community Foundation for Kingston & Area). This was a major undertaking which laid the groundwork for future growth.
Eveline was a member of the founding Board of the Foundation for 7 years and was involved in every aspect of our work, serving on many committees.
As writer and editor, Eveline made significant contribution to the book that was published in 2006, “A Decade of Giving – Celebrating Our First Ten Years 1995-2006”. The book salutes the significant contributions of many people over the first 10 years.
Given her strong interest in writing it will come as no surprise that Ripples, our report to the Community, continued to be one of Eveline’s great interests, which she pursued with intense good humour. This included writing a piece for our 25th Anniversary Ripples edition in 2020.
Here is an excerpt from that article by Eveline…
“When we reached a capital pool of $7 million, our founding president, Michael Davies, commented to the effect that we could relax from our concentrated initial fundraising efforts: the Foundation had succeeded and would continue to do so.
“I asked how he knew: he simply replied that as a long-time fundraiser in our community, he recognized the ‘tipping point’ of success. He was right!
“Thank you to everyone who has contributed to the realization of the dream – your Community Foundation.”
We are grateful for Eveline’s strong leadership in our early days and for her devoted and ongoing support to help build a better community for everyone, a rich legacy indeed.
Eveline’s good friend Virginia Gordon (also an Honorary Life Member of the Community Foundation) shared her memories.
“Eveline was a storyteller. Her hometown was Terrace BC where her father ran a weekly newspaper, the Terrace Standard. Eveline loved going to the newsroom with her father. She was very curious and showed an aptitude for writing. At the age of 15 she became a full-time reporter. I met Eveline in 1995 when the Community Foundation had just begun. We were both Westerners, she from BC and me from Alberta. It formed a strong bond between us. Eveline came to Kingston after marrying Ted Flint, a Kingston real-estate developer. Her journalism skills attracted the attention of Michael Davies, publisher of the Whig Standard. They both were founders of the Martello Tower Society which eventually became the Community Foundation of Kingston & Area. The idea was that CFKA would support a wide variety of community programs by building permanent endowed funds to support them. As Westerners we both knew the strength of the United Way (called the Community Chest in those days) and Community Foundations which expanded into funding many more “field of interest” projects which Kingstonians could support.
Eveline was a staff member at Queens for several years, a founding member of the University Staff Association, and a member of the first two Principal’s Committees on the Status of Women. After working at Queen’s Eveline turned her attention to financial planning where, again, she put her talents to work. I remember calling Eveline one day after I had made a tiny bit on the stock market and thought I could put it to good use. Eveline took me, step by step, showing me how my gift could grow and what a difference it would make. I was thrilled and left Eveline’s office walking on air. Positive change was her mantra. Her memory was prodigious and guided us in so many ways.”
Rob Wood, Chair of the Board of Directors remembers Eveline this way….
“Eveline and I crossed paths many times over the years, beginning shortly after my time at Queen’s. Sometimes it was good-naturedly bidding against each other at a community fundraising auction — all for the cause. Other times we might be discussing political issues relevant to the community. And as an Honorary Life Member of CFKA, right up to the end, she regularly shared her ideas, advice and perspectives to help me in my role as chair. Sometimes she drew on her experiences working in personnel and journalism, sometimes on her expertise in financial planning, and always she spoke from her deep well of feeling for her beloved community. She’s done so much for us all, and we will miss her.”
FOR GOOD | FOR EVER | FOR ALL
Staff Recognition of Honorary Life Members, Eveline Flint and Michael Davies
From an initial endowment of $65,000 in 1985 – the Foundation’s endowments/assets under management have grown to $33.5 million. Over $15 million has been provided to local charities. This could not have happened without the inspiration of dedicated volunteers and leaders, such as Eveline and Michael leading the way.
In recognition of the many contributions of Eveline and Michael to CFKA and its continued growth and development, the staff, led by Andrew Oosterman and Yu Jier Kou donated $2,000 from the Staff Appreciation Fund in their memory to The Eveline and Ted Flint Family Fund ($1,000) and the Smart & Caring Community Fund ($1,000), of which Michael was a Founding Contributor.

Our Granting Programs
Apply for a Grant
Grant News