In memory of Peter Aykroyd

In memory of Peter Aykroyd

We were saddened to learn of the recent passing of Peter Aykroyd at the age of 98. 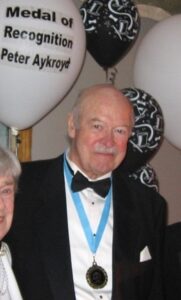 Peter is remembered by those at the Foundation who know him best as an ‘extraordinary man’ who was ‘kind, thoughtful, loving and generous’, with a ‘flamboyant and loveable personality’.  One person reflected after meeting him at a Foundation event that ‘while his tall height could have been intimidating, he seemed to deliberately fade back, leaving the floor to others until it came time to quietly add an insight here and there’ and how his easy manner and short pithy comments at key moments helped to keep conversations on track.

Peter was instrumental in the launching of the Community Foundation 25 years ago, as you can read about in the lovely tribute piece written by Jack Chiang in The Kingston Whig Standard here: https://www.thewhig.com/opinion/columnists/peter-aykroyd-a-life-well-lived.

He certainly helped us bring some celebrity status to our official launch at City Hall, which opened with his son Dan driving then mayor Gary Bennett into Memorial Hall on a Harley!

Peter’s support and guidance of the Foundation the early years was invaluable.  Indeed, one of our Honorary Life Members described him as “a rock and absolutely key to the early success of CFKA”.

Below is a reflection piece about Peter written by Katherine Manley, the Foundation’s first Executive Director who worked with him the most.

We are honored that the Aykroyd family has chosen to direct memorial donations for Peter to the Community Foundation, specifically to our Operating Endowment Fund which will help strengthen the work of the Foundation Peter helped build into the future.

We are eternally grateful to Peter for his vision, zest for life and love for our community.   He will be missed.

Our thoughts are with the Aykroyd family at this difficult time.

Memorial donations can be made on line through Canada Helps by clicking the button below or by cheque payable to CFKA with “Peter Aykroyd” in the memo line.

Click here to make a donation in Peter's memory

I first met Peter Aykroyd by telephone in April 1996 when he called after seeing my photo in the local newspaper, announcing my position as first Executive Director of the Community Foundation of Greater Kingston.  I have never forgotten this incredible conversation in which Peter talked about his vision of philanthropy.  His was a global view and I was very excited about possibly involving him in our endeavours.  A sudden opening came up for the National Conference in May 1996 and I immediately called Peter to see if he would like to attend.  We met in London, Ontario at that conference and very soon after Peter joined our Board of Directors and the Grants Committee.

Peter was an extraordinary, compassionate and thoughtful philanthropist who contributed enormously to both his community and the country.  On the local level, his wisdom, vision and leadership skills were quickly recognized as he helped guide our newly formed Foundation.  He not only made valuable contributions to the Grants Committee but helped in any way he could.  Learning more about his background and after reading his book “The Anniversary Compulsion”, I asked if he would take the lead in planning the formal launch of our local Community Foundation.  This he graciously did and with a full crowd of over 300 people at City Hall and a great deal of publicity, we were off to a wonderful start!

By then we were aware of the major role he played as Director of Public Relations for the Centennial Commission servicing Canada’s 100th birthday in 1967.  Peter put the same amount of thought and hard work into every project he undertakes!   Peter became immersed in our Community Foundation while involving himself at National Conferences.  Andre Picard wrote in a “Globe & Mail Article” that Peter has quietly carved out a niche as one of the world’s foremost experts on the coming millennium and as a social anthropologist”.  The work he did on the Centennial Celebrations helped, as Peter said, “the soul of the country to grow” and with the Millennium, it is “the soul of humanity that will grow”.  He put a tremendous effort into forming a nation-wide gift-giving program called “Our Millennium”.  It involved communities across the country in innovative gift –giving projects that really made a difference.

I have had the opportunity to work with a large number of volunteers and Peter was truly exceptional, giving of his expertise at all levels!  I have been privileged to observe at first hand his leadership skills, his high ideals and humanitarian qualities.