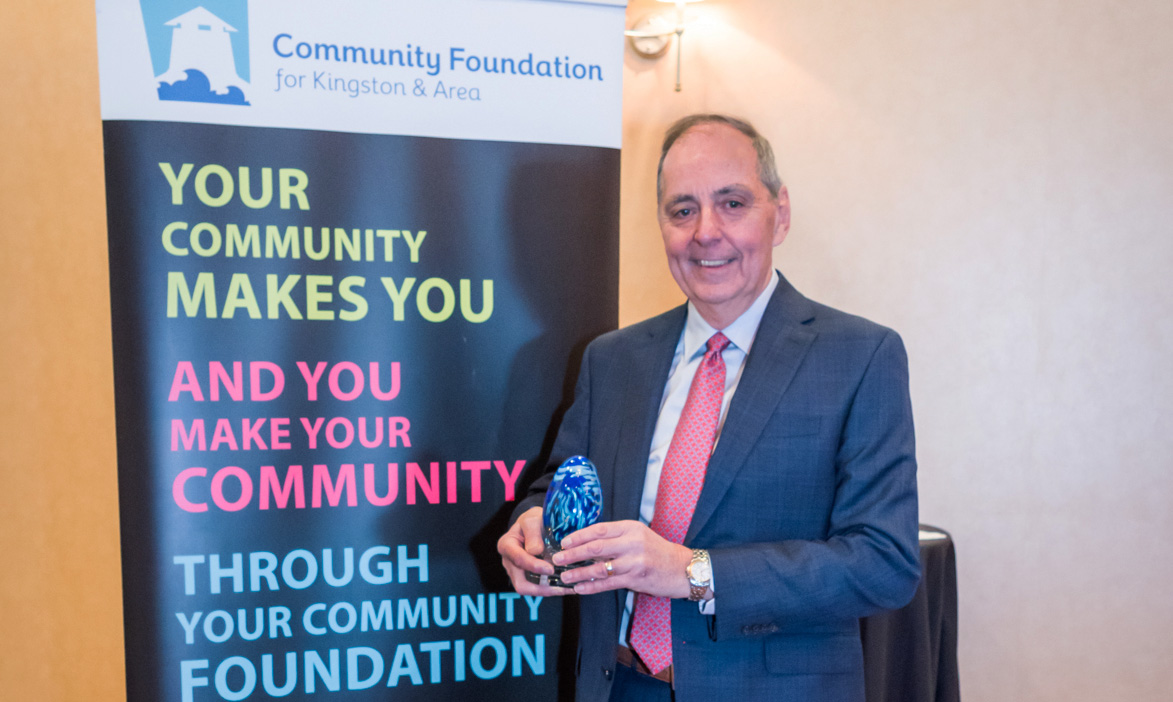 “Use your heads, your hands and your heart to effect lasting change.”

On January 26th, the Community Foundation celebrated the first recipient of the Community Builder Award, Brigadier General (retired) Bill Richard. A true community builder, Bill has worked tirelessly as an advocate for the health of veterans and has contributed his time and expertise to many community organizations in Kingston.

The capacity audience, including Mayor Bryan Patterson and members of the military, learned that Bill, as base commander during the 90’s, had been instrumental in keeping Kingston’s army base alive and thriving during a time when cuts were imminent. He was able to engage all the stakeholders in a concerted effort to keep the base here in Kingston and enhance its presence and scope. Twenty years later, CFB Kingston is double the size it was then, while nineteen other bases in Canada were shut down due to budget restraints.

When he retired, Bill made Kingston his home so he could give back to the community that had embraced the military in its time of need.   He worked with the City Strategic Planning group, was the Chair of the KGH Board, and Chair of Imagine Kingston. He became the co-founder of the Canadian Institute for Military and Veteran Health Research at Queen’s University. Today almost forty universities are collaborating on research on soldiers’ and veterans’ physical and mental health. Last year as part of Canada’s 150th celebrations, Bill raised funds to take 50 young soldiers and 50 veterans to the 100th anniversary celebrations in Vimy.

Bill Richard, you are truly a most worthy recipient of our inaugural Community Builder Award!

Liz Weaver, our keynote speaker for the Inaugural Community Builder Award luncheon, is well known across Canada for her thought leadership on collective impact. She is the Co-CEO of the Tamarack Institute, a busy organization that helps facilitate community change.  In her presentation, her passion about the power and potential of communities was contagious.  She encouraged us to become engaged citizens in our own community, giving examples of how other communities have succeeded in a number of initiatives. (For example, Medicine Hat in only ten years has all but eliminated homelessness).

What does it take to create and maintain change in our communities?  Liz suggested that first the innovators come up with ideas, and then they create partnerships. The network builds as “early adopters” really start the momentum. These people are the “movers and shakers” who get more people and agencies on board.

Liz suggested a methodical approach of collective impact, consisting of five steps: 1. Determining the problem, 2. Determining the shared vision for change, 3. Collecting data and measuring results consistently, 4. Co-ordinating purposeful activities, communicating consistently and openly, and 5. Having a dedicated support staff to co-ordinate the activities of the participating organizations and agencies.

She concluded by offering a simple manifesto, “Use your heads, your hands and your heart to effect lasting change”.